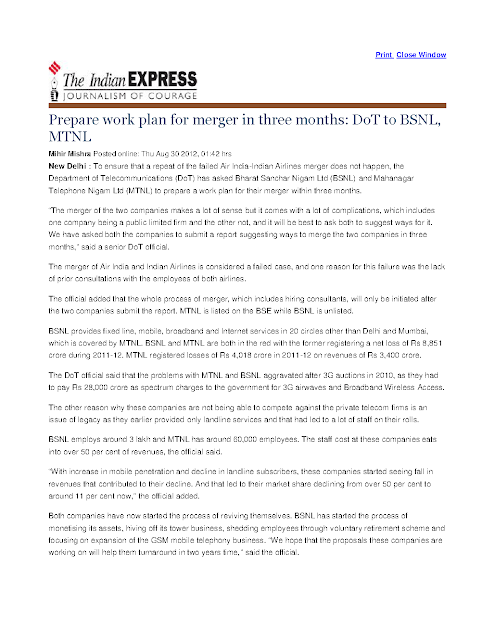 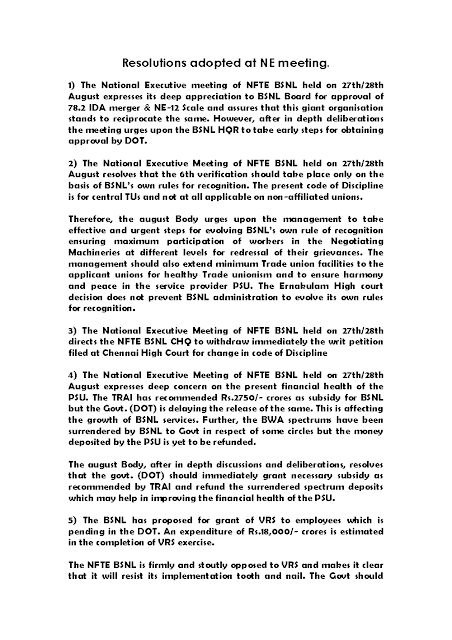 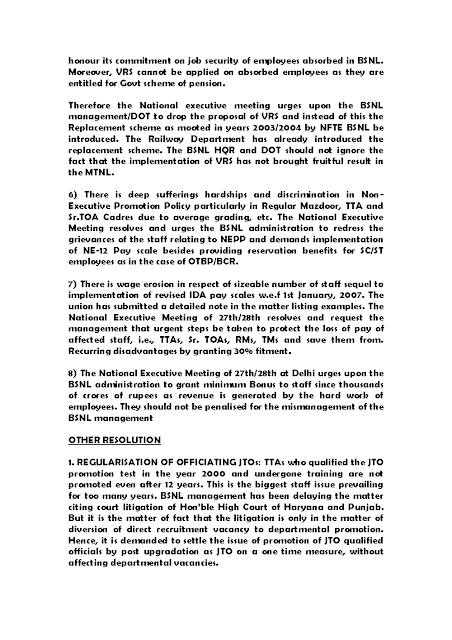 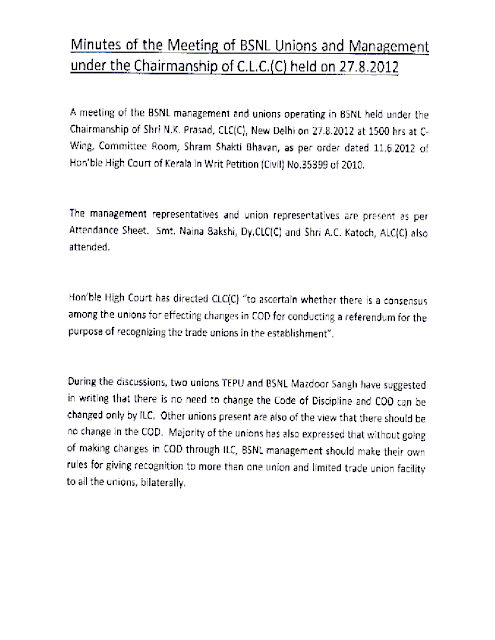 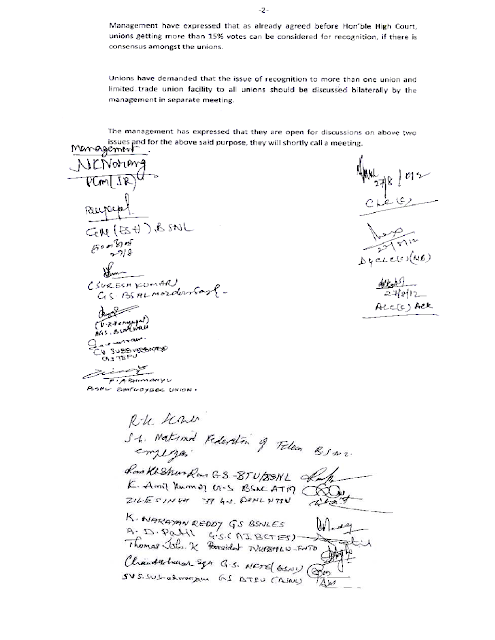 (b) BSNL Board approved NE-12 IDA Pay Scale of non-executives of BSNL.

(c) Also allowed the recruitment of 2670 TTAs in BSNL.

Meeting with CLC ( Central ) on 27.08.2012 as per Honourable Ernakulam HC Bench directive:
All Non executive Unions in BSNL to participate in the meeting. NFTE is striving its best to arrive at a consensus and holding consultations with all Unions. In a meeting held today with other Unions on the subject, Com.Chandeswar Singh, G.S., Com.Pattabhi, Circle Secretary, Tamilnadu and Com. S.S.Gopalakrishnan, All India Organising Secretary participated.
CWC meeting at New Delhi on 27.08.2012 and 28.08.2012: To discuss 12.06.2012 agreement, Framing of BSNL's own rules of Recognition for Unions, 6th Membership verification, BSNL's financial viability & organisational matters.
BSNL Board to meet on 28.08.2012: Likely to take a decision on 78.2% IDA merger and NE-12.
JAO Part–II Examination: SEA section of Corporate office has sent information to Examination section for notification of Departmental Examination against 1898 JAO vacancies. [ News from CHQ ]
TTA training classes: More likely to commence in the second fortnight of September 2012, after review o f results for the SC/ST candidates.
Disabilities under FR 17-A not a bar for Promotions: A Union in our SSA is boasting that it has settled the promotion of a TM under NEPP inspite of FR 17-A being imposed on him. Rules are crystal clear that FR 17-A causes disabilities only in respect of LTC, QPC and requisite minimum qualification for appearing in the Departmental Examinations and not on promotions through DPCs.
By no means it is an achievement!
VRS in BSNL: The proposals of telecom PSUs BSNL and MTNL to reduce their workforce by 1.21 lakh by offering voluntary retirement scheme to staff will cost them over Rs 17,445 crore, the government said today.

"DoT has received from BSNL, a voluntary retirement scheme (VRS) aimed at reducing its workforce by one lakh. Likely expenditure on ex-gratia is estimated to be about Rs 12,371 crore. In addition, there will be expenditure on normal retirement benefits viz gratuity, pension, leave encashment and transfer grant," Minister of State for Communications and IT Milind Deora said in a written reply to the Lok Sabha.

MTNL, which offers services in Delhi and Mumbai, has also planned a VRS aimed at reducing its workforce by 21,000 and the estimated expenditure likely to be incurred is about Rs 5,074 crore, he added.

News on VRS and looting our wealth by Corporates


BSNL loss stood at Rs 8,851 cr during 2011-2012: According to the figures presented by Minister of State for Communications and IT, Milind Deora in Parliament on Friday, the financial loss of state-run telecom firm, BSNL, touched Rs 8,851 crore during 2011-12.

“The reason for increase in expenditure is due to a huge workforce whose wages is around 50% of the revenue,” Deora said. The minister said the company was readying a plan to rid itself of excess workforce through VRS, targeted at employees who were 45 years of age and above. Click here.

CAG slams Government in its reports tabled in Parliament on Coal, Power and Delhi Airport; Points finger at PM for discrepancies: CAG says Coal Mines allocation caused the exchequer a loss of Rs 1.86 lakh crores, much bigger than what the 2G scam cost. On Power, Tata and Reliance Power favoured while Reliance alone was benefited to the tune of Rs.29,033 crores. GMR favoured in Delhi Airport causing a loss of Rs.3750 crores to exchequer.

Much awaited board meeting expected on 28/08/2012 for merger of IDA 78.2% and NE 12 scale .Now the doomsayers may say that DOT will not approve.They may say the same , till the order to be issued in this regard.
நேரம் 6:14:00 பிற்பகல் கருத்துகள் இல்லை:

Callous and indifferent approach is dangerous

Very recently a top Manager in Maruti Udyog has brutally been killed causing serious
concerns at all corners. Whatever be the cause for the cruel murder but the heinous act can
neither be justified nor appreciated. The violence has no place in Trade Union movement.
Nevertheless the management and administration of various PSUs including BSNL and the
private sector must ponder deeply on the incident and appreciate that the grievances and
problems of employees must get proper attention and there should not be casual approach
in the redressal. The workers should also be protected from exploitation and discrimination to
avoid such gruesome happening.

The greatest PSU, BSNL, is a service provider in which maintaining of industrial peace is
of great importance and significance. There should be congenial atmosphere for the workers
to contribute for the PSU and to serve the public without fear. This is obviously possible when
the workers are not ony discriminated but fairly treated. The administration at various levels
should be alive to their grievances and should not blame them for their own omissions,
commissions and failures.

Presently lakhs of employees in BSNL are working in the nook and corner of the country
and their problems are enormous. What to say of redressal of their grievances they are being
ill treated, discriminated and being denied their legitimate claims due to one union policy of
BSNL administration. Some officers sitting in the AC Room at BSNL Head Quarters and
within the secured zone are tight and determined to bulldoze the demand of Unions for
BSNL's own rules for recognition. This demand is to ensure that the workers representatives
are properly and adequately represented at negotiating machineries for settlement of their
problems. These officers are adopting casual and indifferent approach on the issue on one or
the other pretext causing unrest and dissatisfaction amongst the employees. While violence
has no place in Trade union movement but callousness some time provoke and compel the
employees to cross the Lakshman Rekha.

We request the top management to ensure that the proposals and suggestions are not
disposed of by lower level officers in a casual and arbitrary way resulting serious concerns
and provocation. 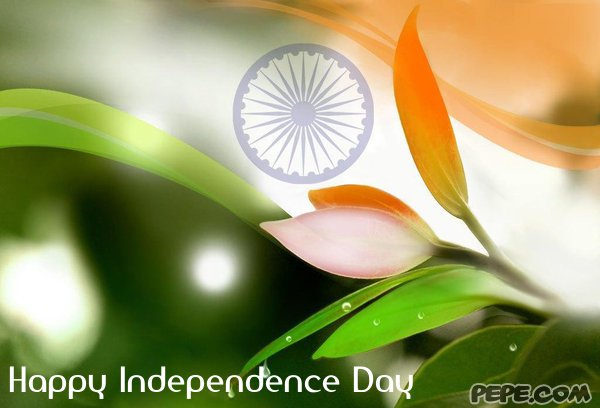 Meeting with CLC: According to

sources the CLC is convening the

meeting of BSNL unions on 27th

August for change in code of

Discipline as per direction of

President and GS met CMD on 9th and raised the following issues: (1) Payment of Pension to absorbed employees in BSNL: The points mentioned in the memorandum addressed to Telecom Minister were mentioned and CMD agreed to forward the same to DOT for further course of action. (2) Strike agreements and the follow up action: Union representatives pointed out that the delay in settlement of strike agreement is making employees restless. It is in the interest of all that the settlement be expedited. CMD said the issues are in process. The Management Committee has already approved the 78.2% IDA merger and is being sent to Board for acceptance. Child care leave is already in the Board. The Committee is processing the recommendations of retirement benefits to BSNL recruits. (3) BSNL’s rules for recognition : CMD told that a Committee is working on this and he will study the issue further.
CMD in course of discussions expressed serious concerns about services in BSNL. He sought cooperation from workers to lift the Company from downtrend. According to him materials are now supplied and available in the field. NFTE HQR appeal to employees in general and its members in particular to work sincerely to improve the services. BSNL has to be protected.
The Recruitment Rule of TM is revised and now it is sent to BSNL Board for its approval.

A Meeting of the Forum of BSNL Unions/Associations was held on 8
th August 2012 at the
BSNLMS office presided over by Com. C. Singh, GS, NFTE. Com. V.A.N.Namboodiri, Convener,
welcomed everybody and briefed about the latest developments. Com. GS and President along
with the representatives of almost all unions participated.
After discussion, the following decisions were taken:
1. Review of 12 June Strike agreement:
The BSNL Management has approved the 78.2% IDA
fixation and now will take it to the BSNL Board. Regarding granting of Child care leave and
superannuation etc. of BSNL recruited workers, no action seems to have been taken by the
management. CMD should be met to expedite the matters. It was also decided to strongly
protest the DOT letter denying BSNL Unions access and taking up of issues with DOT directly.
2. Victimization of SNEA All India leaders:
The transfers of Coms. G.L.Jogi, President,
K.Sebastin, GS and A.A.Khan leaders of SNEA(I) have been transferred from Delhi to outside
stations and issued charge sheets without any justification. The Forum expressed its strong
protest against the victimization of top leaders of SNEA(I) which it considers as an attack on the
Forum itself. It demanded immediate vacation of the victimization. It was decided to meet the
CMD urgently in the matter.
3. NTP, subsidy by Government etc.:
The Forum demanded the government to urgently
finalise the grant of Rs. 1,500 crore this year and Rs. 1,250 crore next year from USOF which has
been recommended by the TRAI and DOT. It expressed happiness in the BSNL being awarded
the Rs. 12,000 crore project for the vacation of the spectrum by Defence.
4. 'Customer Delight Year' - procurement of equipment etc :
The meeting expressed anxiety
in the undue delay in the procurement of equipment like Cable, CLIP, GSM lines, Broadband
Modem etc. and demanded for early supply and decentralization of powers in this respect.
Circle Secretaries may be contacted and find out the equipment position in the circles.
The meeting decided to extend the
'Customer Delight Year' for one year from August 2012. It
called upon the workers to strive hard to improve the efficiency and better service to the
subscribers.
5. ITS Absorption:
After discussion about the present situation, the meeting decided to meet
the CMD to expedite the process of repatriation of ITS officers opted for DOT.
6. Election of Forum Office-bearers : It was decided to discuss the issue later
நேரம் 1:13:00 பிற்பகல் கருத்துகள் இல்லை:

Letter to MOC by CHQ on Pension entitlement 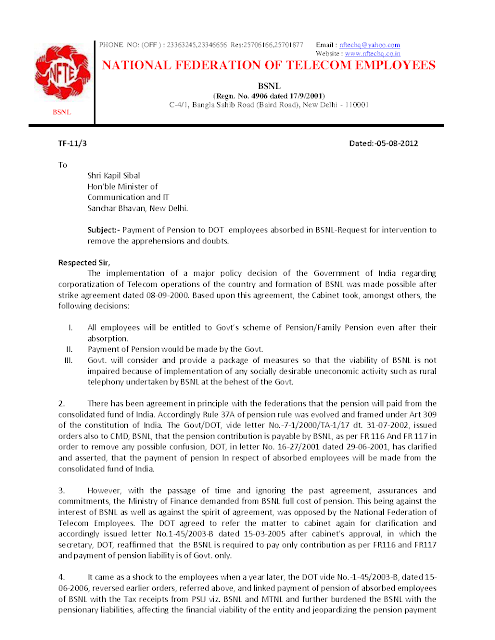 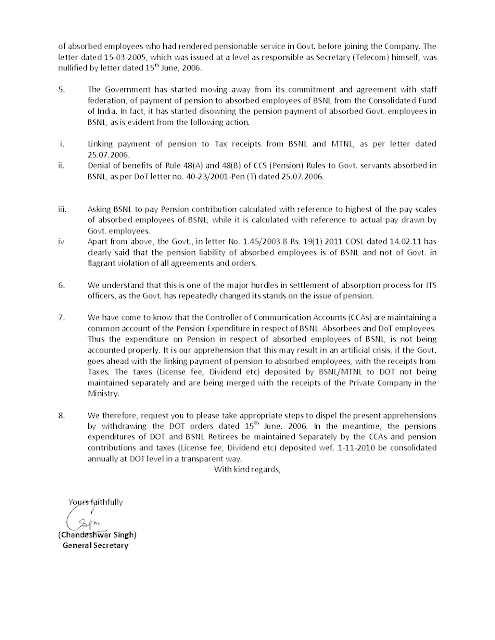 News from our CHQ : The BSNL Management Committee in its meeting held on 02.08.2012 has approved the proposal of 78.2% IDA fitment benefit to BSNL employees. The MC approved proposal will be sent to next BSNL Board Meeting, which is expected to be held in the last week of August 2012.
This may come as a shock to the doomsayers, namely PEWA and BSNLDEU, who are orchestrating that 78.2 IDA merger could never be achieved and that the signatories to the 12.6.2012 agreement - including the representatives of NFTE - are cheating the employees. Infact, the employees are well aware that any agreement having impact on our Pay needs to be approved by the MC, Board and DOT and that the signatories to the Agreement need to keep vigil so that such approval and implementation is not unduly delayed. The employees are also aware that 78.2 merger can not be implemented by simply issuing an administartive order.
The employees are also aware that the 12.06.2012 agreement would have definitely been called an Historic one if the representatives of these 2 Unions had got an opportunity to affix their signature on it !
Doomsayers = one who predicts calamity at every opportunity.
நேரம் 9:48:00 பிற்பகல் கருத்துகள் இல்லை:

02-08-2012 management meeting  approved  78.2%  merger as per the agreement.we expect the same will be approved by board also by last week of august.
நேரம் 12:30:00 பிற்பகல் கருத்துகள் இல்லை: