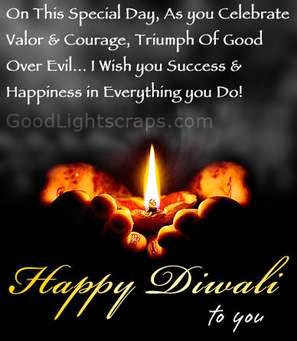 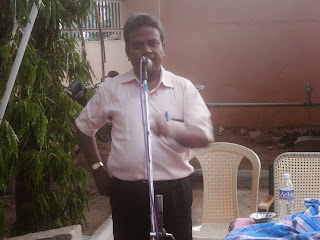 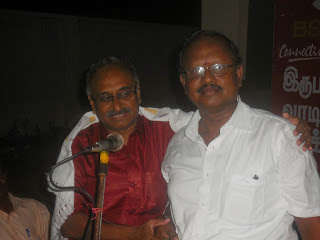 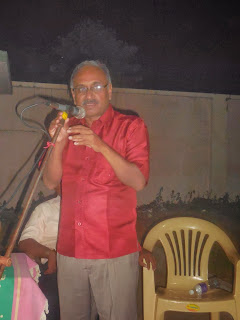 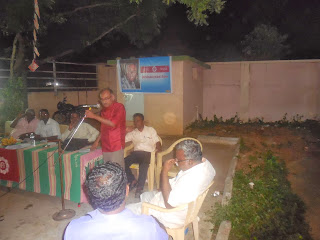 Bonus : President, NFTE, GS and two Secretaries at the HQs met CMD today and discussed about Bonus. CMD, BSNL expressed his inability citing the present financial condition of the Company.
CMD, BSNL conveyed his appreciation to the employees of Tamilnadu Circle, especially of Madurai SSA. He expressed his wish that the employees of other Circles also perform in a similar manner.
22.10.2013 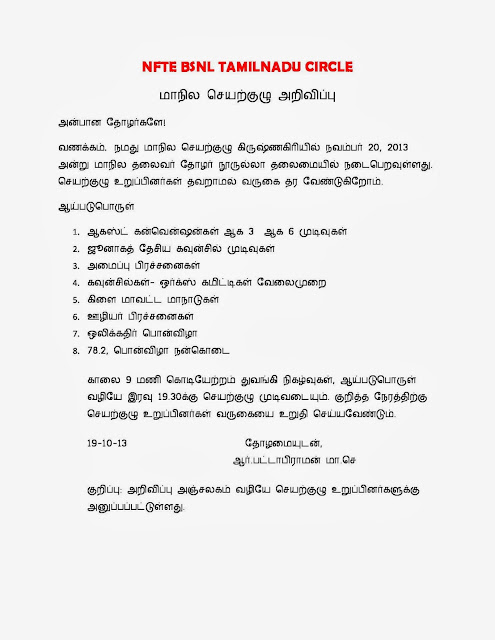 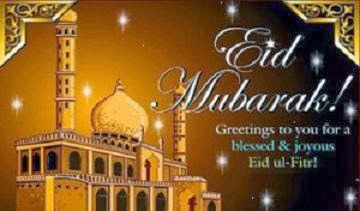 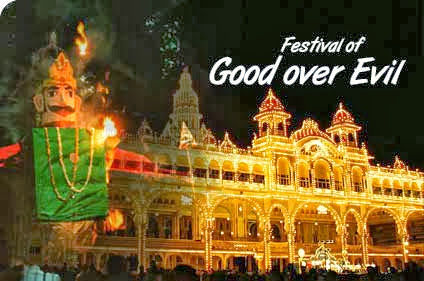 Meeting with the Director (HR) on 8th October:-
The scheduled meeting took place on 08-10-2013 under the Chairmanship of
Shri A.N. Rai, Director (HR), for settlement of pending and pressing demands.
The Sr. GMs(SR), (Est) and Dy. GM(SR) also participated in the meeting. The
union was represented by President, General Secy and Secy, Com. A. Rajmouli.
The items discussed are mentioned below.
Bonus:-
The Chairman mentioned about the financial condition of the company. The
union representatives told that the Bonus is right of the workers and it should not
be linked with the profit. The quantum of bonus can be negotiated and a
committee be formed to evolve the Bonus formula. The CMD be apprised of the
concerns of the employees in the interest industrial peace. The Chairman agreed
to this.
Average entries:-
Average entries should not stand in the way of upgradations in NEPP, the union
demanded.
Proposal to this effect is being sent for the consideration and approval of
the Management committee to meet the demand.
Stagnation of RMs/Group ‘D’ staff:-
A committee consisting of Sr. GMs(SR), (Est) and Sr. GM(EF) is formed to study
and redress the problem. There are difficulties due to agreements of NEPP and
wage revision which are sacrosanct. The union pointed out that thousands of
grou ‘D’ employees are stagnating which is not good for the PSU. They could not
get even one rupee after 78.2% IDA merger.
Wage erosion of employees appointed on 01-01-2007 or thereafter:-
Union demanded that the Director (HR) and Director (F) should meet to settle the
matter. The union expressed anguish over delay and stated how the issue of
JAO/JTOs was resolved quickly. The chairman agreed to discuss and finalise the
same within a week.
Pension and Terminal benefit to D/R staff:-
The Director (HR) asked the Sr. GM(Est) for expeditious movement of the
committee’s proposal.
Change in R/R of TTA:-
The official side informed that the change in R/R of TTA is in final stage and
within next few days same will be available. The unions may submit their views
on the draft proposal of the committee.
Regularisation of officiating JTOs:-
Union was told it is being processed.
Accommodation facilities:-
The official side was apprised of that NE-1, A and N and Gujrat circles have not
provided accommodation to union as yet despite orders of BSNL HQR Sr.
GM(SR) was asked to look into the matter.
JTO LICE result:-
The union demanded early declaration of results of JTO LICE. The same should
not be delayed on the plea of litigation. Immediate serious steps be taken for final
disposal of the Court cases. Chairman agreed and asked the Sr. GM(Est) to do
the needful for early declaration of results.
Council meeting:-
Union demanded that atleast one meeting should be held at all levels in year
2013.
The chairman gave positive response on this.
CGA
The case of CGA of M.P. circle was also raised. It was pointed out that the
former Additional GM(Est) is not releasing the MP CGA file resulting nonsettlement
of cases.
All items could not be discussed as such union requested for another date.


Demonstration will be held during lunch hours as
நேரம் 4:31:00 பிற்பகல் கருத்துகள் இல்லை:

Meeting with Director ( HR ) on issues

Meeting with Director ( HR ) : NFTE met Sri A.N.Rai, Director (HR) today. The Official side was represented by Sr.GM (HR), Sr.GM(Estt) and DGM(HR). NFTE was represented by Com. Islam, President, Com.Chandeswar Singh, GS and Com Rajmouli, Secretary.
Gist of discussion.
Bonus : The official side pointed out the financial condition of the Company. NFTE said Bonus is the right of the workers and that while the amount can be negotiated in view of the financial condition but denial of Bonus will demoralise the workers. Dir (HR) assured to take up the issue with CMD.
Stagnation in the cadres of Group D and RM : The management pointed out the difficulties in settling the issue because of Wage Revision and NEPP agreements. Union side argued that thousands of Gr.D and RMs are retiring with the stagnation creating strong resentment in their minds and issue needs to be settled. A Committee consisting of Sr.GM (HR), Estt and GM(EF) will be formed.
Wage erosion of employees appointed on 1.1.2007 and thereafter : Director (HR) assured to hold discussions with Director ( Finance ) to settle the issue.
Pension and other issues related to Direct Recruits : Director (HR) assured to analyse and settle the matter.
Regularisation of officiating JTOs : The matter is under process.
Recruitment rule to the cadre of TTA : This is on the verge of finalisation and will be uploaded in the Intranet shortly. Unions' view will be taken in to consideration before issue of the same.
'Average' entries in ACR : Proposal is sent to Management so that these entries dont affect promotion under NEPP.
JTO LICE results : Director (HR) instructed Sr.GM (Estt ) to speak to all CGMs and ensure early declaration of results.
Union side also pointed that NFTE is yet to provided office accomdation in NE-I, A&N and Gujarat circles and sought early allotment. Also, as regards to Council meetings at National, Circle and SSA levels, NFTE sought ensuring of atleast one meeting before the end of this calendar year and early issue of instructions in this regard.
நேரம் 9:13:00 பிற்பகல் கருத்துகள் இல்லை: 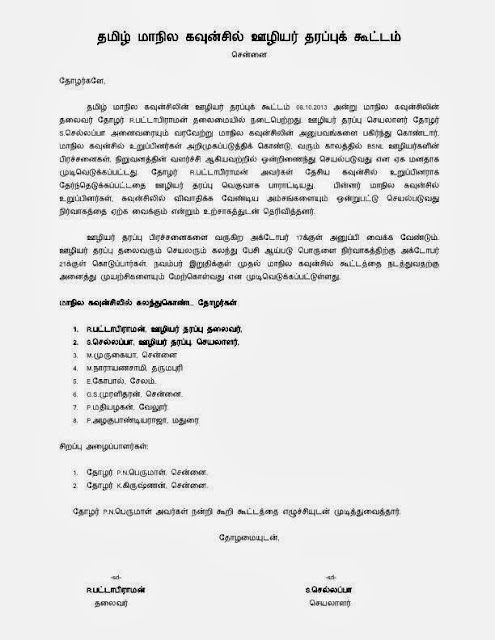 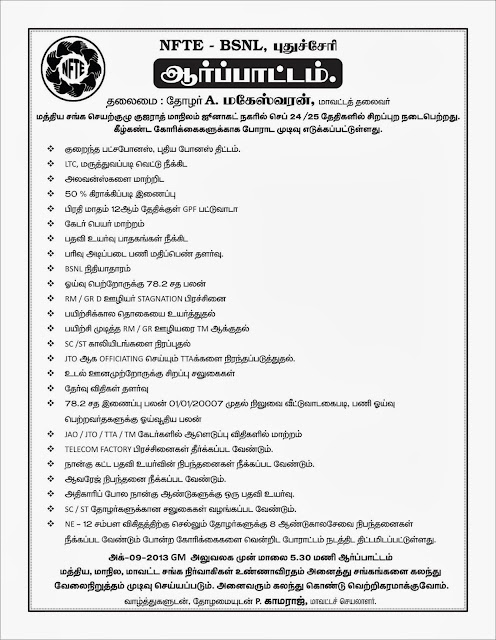