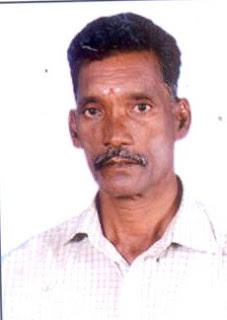 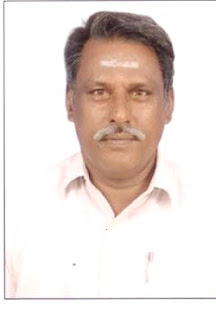 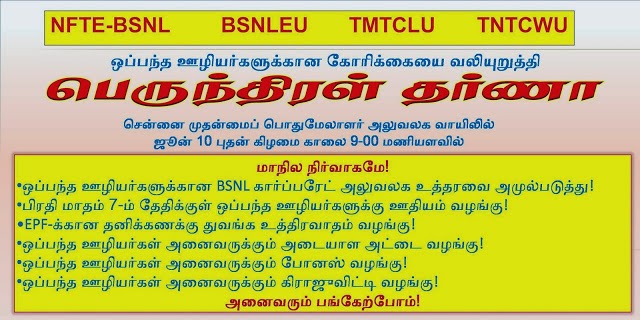 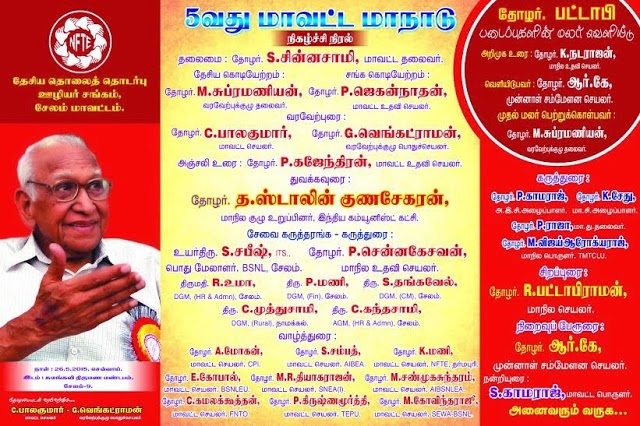 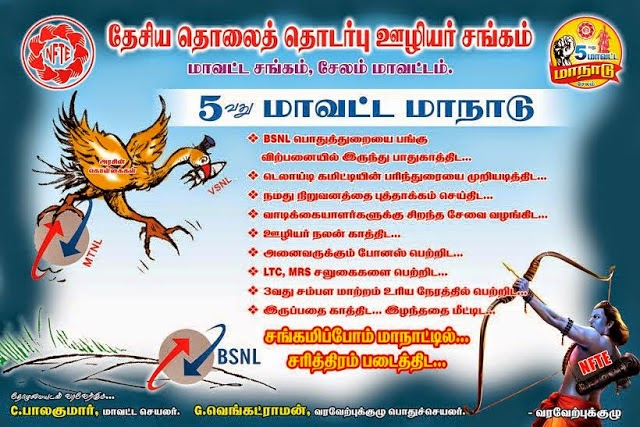 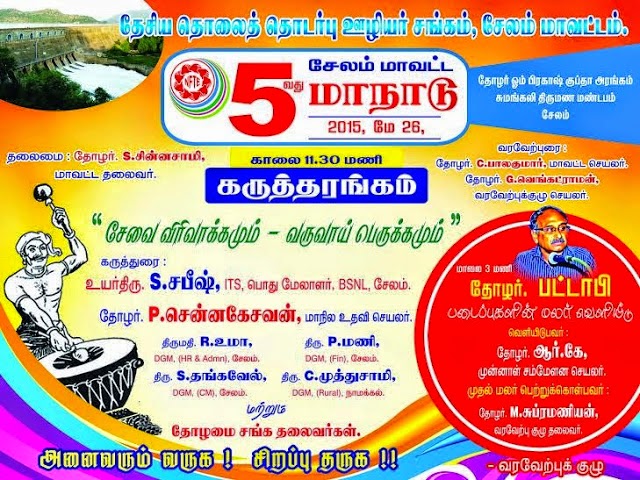 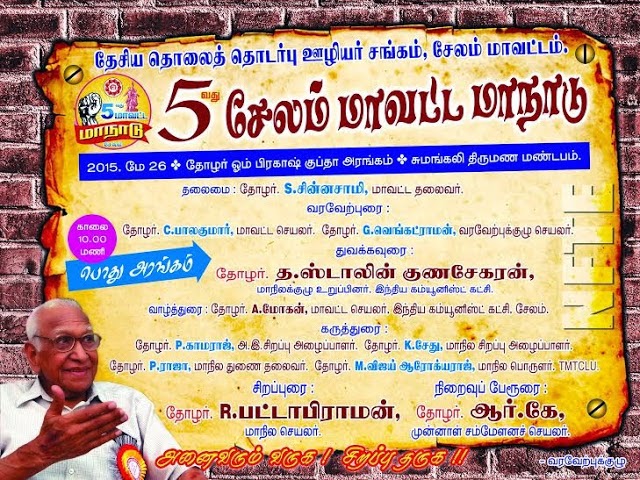 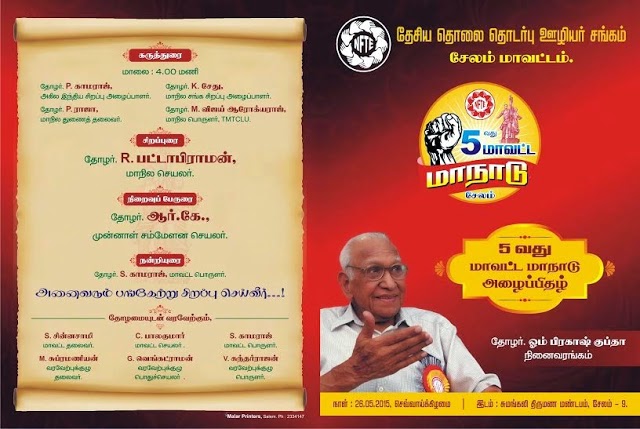 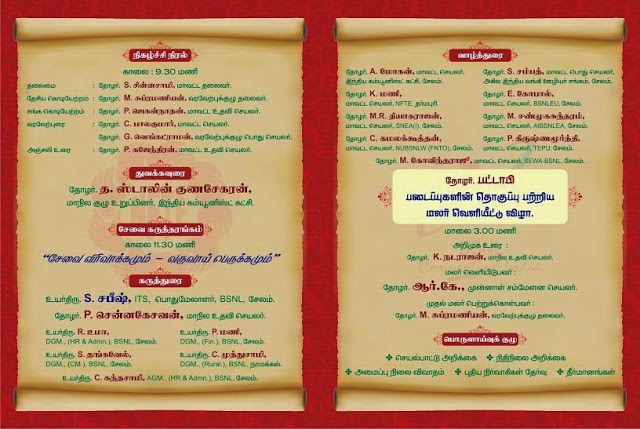 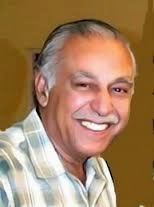 The 32nd National Council meeting was held today. Shri A.N.Rai, Director (HR) presided over the meeting. Smt Sujata Ray, ED(F) and  Dir (HR) designate has also particiapated. In his address, Shri A.N.Rai spoke about the precarious financial condition of BSNL and  pointed out that operative losses will result in danger to the organisation. To avoid operative losses, he wanted the Staff to put in their best efforts to increase 10% revenue.  He said Govt may give Rs.3000 crores this year. He also said that the recent night free tariff scheme may result in a revenue dip of 5%, unless otherwise compensated by increased  DELs, etc.

Smt Sujata Ray, ED(F),  in her address said there is nothing to worry at present. She said that Finance and HR problems are interlinked. She also said that while Management has a parental mindset, Staff should have some sacrificing mindset. She pointed out that Committees formed to address Staff issues should not prolong forever to give their reports/decisions as that would demoralise Employees.

Staff Side Leader Com.Islam in his opening remarks expressed his anguish over delay in conduct of meetings. He told that Staff are ready to co-operate but shortage of materials is a problem. He also spoke about issues of Non Executives like non finalisation of JTO RR & JAO RR, Wage Erosion, Stagnation, ERP related problems, payment of Minimum PLI, relaxation for SC/ST candidates, etc. He wanted the Management not to be vindictive towards those who have participated in the April Strike as the demands were only for betterment of BSNL. He asked for a suitable accommodation to NFTE. He also wanted following of a uniform procedure in dealing with Court cases.

After the address by Secretary, Staff Side, Com P.Abimanyu, items in the Agenda were taken up for discussion.

1.      Relaxed standards for SC/ST candidates in LDCEs conducted/results declared between 22.7.97 and 8.9.2000:   Formal letter addressed to DOPT seeking guidelines. Issue will be addressed on getting a reply.
2.      Pension to DOT absorbed employees vis-à-vis withdrawal of 60:40 DOT orders:  Taking all the input from the Staff Side, resentment shown in the National Council it has been told that a letter will be sent to DOT justifying the BSNL position on this issue. It appears that the Member (Fin), DOT is also positive on this issue.
3.      Reviewing of BSNLMRS: Staff Side sought appointment of a Committee to review BSNLMRS. ED (F) replied that there should be a definite terms of reference. It was agreed to examine the demand.
4.      Presidential orders in r/o TSMs who have been appointed as TMs after 30.9.2000: Till date, about 60 cases have been received from Circles. They will be sent to DOT for issue of POs.
5.      Formation of Works Committee in Circle and All India level: Will be examined.
6.      Stagnation issues  &
7.      Aberrations in Pay fixation due to NEPP:  About 16000 such cases have been brought to notice, bulk of which is in NE3 scale. Though it is not possible to change the scale, other means like the rules quoted by the Staff Side will be examined to settle the cases.
8.      Inclusion of Women members from Union side in Complaint Committees for prevention of harassment of Women employees in work places:  Difficulty was expressed in making such inclusion as there are codified rules on the subject.
9.      Provision of Rs.200 SIM to BSNL employees posted in MTNL area and Off-net calls: This will be discussed in the Management Committee.
10. Laying of Undersea cable linking A&N with mainland:  Additional bandwidth through new satellites will be bought and augmented.
11. Special recruitment in NE cadres for A&N islands : Necessity will be examined, especially for the  TTA cadre.
12. Payment of HRA to dependent stations falling with in 8 KMs of a city/Town: Central Government Rules on the subject are being followed.
13. Utilisation of vacant Staff Quarters: Trying for maximum monetisation.
14. Social security and other facilities to BSNL staff deployed in Naxal areas: Will be examined. 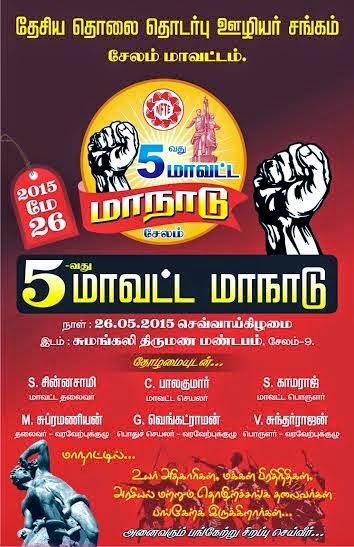 BSNL Management Trainee Recruitment 2015 : Bharat Sanchar Nigam Limited (BSNL) has issued notification for recruiting the posts of Management Trainee Internal and External Management Trainee. BSNL has invited applications for this recruitment to fill up 400 vacancies. Interested and eligible candidates can apply online through the official website before June 14th, 2015.

NEW DELHI: State-run BSNL is targeting a revenue of Rs

500 crore in the current financial year by utilising its land

bank and monetisation of 75,000 towers, among others. The telecom operator has set a target of generating Rs 500

seven telecom factories as well as monetisation of its 75,000

towers, it said. The company is planning to enter intra-circle roaming pacts

with other operators to monetise its network of over 75,000

NEW DELHI: In an attempt to bounce back as a profit making entity, state-owned BSNL plans to monetise its assets like land, towers, factories and educational centres as it gets approved by Department of Telecommunications. The company estimates to garner around Rs 5,000 crore annually from monetising its assets.
Anupam Srivastava, Chairman-cum-Managing Director told Express, “If all the things put together for monetisation we would get around Rs 5,000-6,000 crore every year. We are already in talks with other operators for renting our towers and also with various colleges for turning this huge educational centres into engineering colleges.”
The company has around 70,000 towers, 30 educational centres and 7 factories as part of monetisation plan. The operator also hold assets worth thousands of crore in over 3,500 towns of the country, which is waiting for DoT’s approval to liquidate land to generate additional funds for the company.
At present, BSNL has tower sharing agreements with most of the private operators. As the towers of BSNL are spread across the country, even in the remote areas, private telcos prefer to share BSNL’s infrastructure rather than investing in setting up of their own network.
Srivastava further added that the company’s top line is around Rs 28,000 crore but our staff expenses are around Rs 15,000 crore. “That is cause of concern for us,” he said. For private operators their staff expenses are 5 per cent where as in our case it is around 55 per cent of our revenue, Srivastava added.
To reduce staff expenses for the company, a proposal pending in DoT for last one year. There are two options - first, to provide VRS, which will see an outgo of Rs 12,000 crore from the government. Another, to provide a soft loan of around Rs 6,000 crore to meet the staff expenses.
To further prune its losses, BSNL aims to reduce its depreciation loss of Rs 7,500 crore and generate revenue from data business.
Telecom Minister Prasad had asked BSNL to improve quality of services, especially in border and extremist-affected areas, in a bid to become market leader and win back people’s confidence.
He said that the government is committed to revive BSNL and a number of initiatives are in the pipeline to bring the PSU back to the position of market leader.
BSNL’s profits started declining from Rs 10,183 crore in 2004-05 before recording a loss in 2009-10.
நேரம் 7:26:00 பிற்பகல் கருத்துகள் இல்லை: 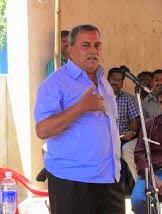 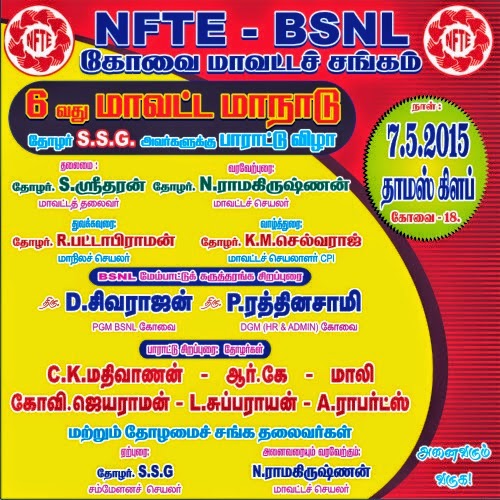